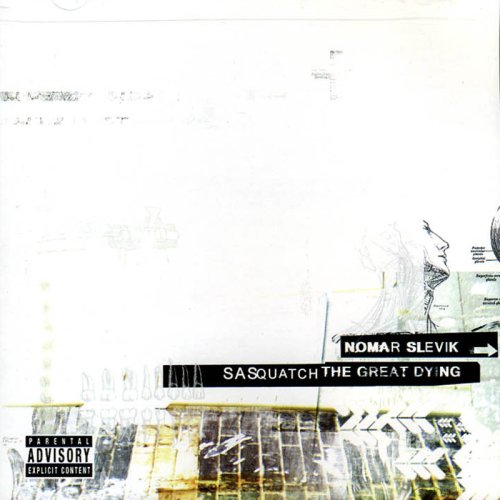 Artist, producer and engineer nomar slevik has been creating electrical transcriptions for well over a decade. With influences that range from Credence Clearwater Revival to Ice-T, slevik's sound falls somewhere between the old school and avant garde. His combination of new sounds and unusual subject matter makes for a unique experience that defies hip-hop convention. His purpose for diminishing the population of unwrecked mics, stages, and sound systems causes this virtual Robocop of the burgeoning Indieground to take his rightful position… the top of his game. nomar slevik has worked, recorded or performed with the following artists, Grand Buffet, jdwalker, Bleubird, The Mole, K-the-I???, DJ Mayonnaise, Moshe, Brzowski, Aamir, DJ Jon, Ancient Mith, Id Obelus, Aresnic and many more.

First off let me tell you that I love this album because of its movement from beginning to end. What I mean, is the pace of the album is so fast, you rarely get time to breathe. You re also guaranteed to have a sore neck by the albums conclusion as well. Two questions come to mind while listening to Nomar s material, What did he just say? or He didn t just say that did he? These are questions that cats who don t know who Nomar is and what he reps would say. To me, heads are supposed to know and understand. And if they don t, well then, the music wasn t meant for them cats in the first place. But that doesn t mean you shouldn t check him out anyway. Slevik and his cohorts are experimentalists meaning, they re at there best when they re spontaneous. Nothing is planned or forced, it just happens and it s magical in the end. RPM lends a hot beat to get Slevik racing on the intro track Ammonia . While there s a guitar plucking, it does not force itself forward or forces Slevik to adapt to it. However, this and also the other beats carry the words in a silent manner, and therein lies their strength. On the second track, Arsenic keeps the pace going, as Lord Grunge and Slevik mingle effortlessly on Observation . There are small but masterful production details that you ll find on Sasquatch the Great Dying but, the album rests on production that is refreshingly experimental and bumping, yet simultaneously serves the purpose of accentuating the lyricist s voice, words and skill on the mic. On The Reason , Arsenic joins Slevik and again, you get another track where the emcees manage to spit their rhymes in a very talking fashion, that lull you with soothing ease. Nomar Slevik refuses to be anything but himself and sounds so confident with his rapid, staccato raps and sing-song flow that he demands attention. He seems to point out the silver lining while never ignoring the grey clouds. The lyrical wordplay rotates around the axis of social commentary and personal introspection, creating an album that not only sounds good, but means something, too. The attitude towards this production doesn t remain ambivalent and should be admired for the sure-shot glimpse of avant-garde it is providing. Another banger is the track Practice Hard featuring The Mole. With the pair, restrictions don t mean anything. The beat is splendidly reduced and these two emcees seem to have sipped from the same cup of creativity, as they are building quality verses that are as solid as concrete structures. By this time we have gotten butter smooth offerings like, the Losaka produced Chopper Like , or Electrical Storm by E9ine In the end, Sasquatch A Great Dying is a moody, encapsulating record. Siq Records did themselves justice by adding Nomar Slevik to there line-up. Siq Records fits Nomar and Nomar gives Siq Records a fitting voice. Please support Thanx, --Cypher777/Insomniac Magazine

Nomar Slevik has been making music since the mid-90 s, and in that time has combined various sound textures and influences into something that comes off as a hip-hop hybrid of whatever you want to throw at the guy, or perhaps it s more appropriate to call it a hip-hop sponge. The spirit of the boom bap is all over Sasquatch: The Great Dying (Siq), and in each of the ten tracks, where he goes back and forth from rapping to singing, he shows the kind of confidence that comes from putting a lot of time and effort into making music. What does it sound like? If Everlast was signed to Mush Records, it would come close to the edginess found on this EP. The sounds of the Middle East which open Bunnyman (produced by Moshe) is the perfect backdrop in a track about searching for someone and one s self., while :Last Stand On Crystal Lane (produced by DrNo) and Electrical Storm (produced by E9nine) would fit perfectly on a Lyrics Born album, especially with the Bowie-esque sample that helps shape the song s mood. Slevik s flow goes back and forth from the abstract to being direct and to the point, although because of the musical backdrops and singing that he does, it might be considered anything but hip-hop. It s hip-hop, it s indie, it s influenced by electronic music, it s a mixture that ends up being a recipe that can be consumed as whole, while taking in the ingredients if you wish to dissect it layer by layer. There s an undeniable groove that will keep listeners moving, grooving, and maybe guessing as to what direction the EP, and Slevik s music, will go next. --John Book/The Run-off Groove

Portland, ME rapper/producer Nomar Slevik is one of those avant-garde rappers that flips his vocal style back and forth between simple, straightforward rapping and layered singing. His lyrics use a simple one-two rhyme pattern over often short verses, and each song is usually only one or two of those. Slevik produces just one track ( The Reason ) and assists on one other ( Practice Hard ), but he selects some great slamming beats from a bunch of nearly unknown underground producers. The exception is Anticon s DJ Mayonnaise, whose aggressive remix of piano-heavy opening number Ammonia, produced by RPM, appears as a bonus track. Sandwiched in between are eight short songs about subjects ranging from aliens/alienation ( Observation ) and killer ghosts ( Bunnyman ) to politics ( The Reason ) and being unemployed ( Electrical Storm ). Oh, and Sasquatch enters the picture on the perverted Practice Hard, thanks to guest MC Mole, who co-produces. Although The Day I Passed Away is a tedious techno track that doesn t suit the rest of the album, Sasquatch: The Great Dying is still short, sweet and mostly successful. (SIQ) --Thomas Quinlan/Exclaim!

The TeX Users Group (TUG) is a membership-based not-for-profit organization, founded in 1980, for anyone who uses the TeX typesetting system created by Donald Knuth and/or is interested in typography and font design.

Join or renew with TUG (trial memberships available for new members) to support use and development of TeX and friends.

Get started with TeX if you're looking for a system to install, or have questions to ask.

If you're looking for help, you can get community support via: a q&a site (tex.stackexchange.com), forum (latex.org), reddit, public mailing list (texhax), and in other ways.

Recent events TUG is a not-for-profit organization by, for, and of its members, also representing the interests of TeX users worldwide. If you use any TeX-related programs (TeX, LaTeX, ConTeXt, Metafont, MetaPost, Texinfo, et al.), please consider joining TUG (or another TeX user group). Memberships and donations are tax-deductible in the US.

TUG membership benefits include our journal TUGboat (available both in print and online) and the TeX Collection software: TeX Live, proTeXt, MacTeX, snapshot of CTAN. TUG also runs an annual TeX conference, among other activities.

The Comprehensive TeX Archive Network (CTAN) is the primary repository for TeX-related software on the Internet. CTAN has many thousands of items; its package list, topic cloud, and CTAN search page can help you find what you need.

New to TeX?
Getting started
FAQ
History of TeX

Many thanks to all the individual and institutional members, as well as our donors, who keep TUG going. If you're not already a member, please consider joining TUG or making a donation, and thanks. Updated: $Date: 2021/09/04 22:44:34 $